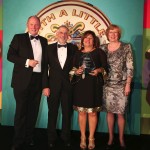 WEB has been honoured with many awards for our excellent services within the community and we’re delighted that our achievements are recognised by such a diverse range of respected organisations. Below you can find details of our various awards.

WEB has a total of 17 Awards to date.    Our highest accolade being that WEB was awarded  ‘The Queen’s Award for Voluntary Service 2007’ which acknowledged the quality of training and support we delivered to our service users and volunteers.   WEB was 1 of only 2 organisations in Merseyside  to be awarded  it that year out of 253 nominations.    Other awards include:  ‘Merseyside Police Authority’s Community Safety Awards 2011 & 2012’  which acknowledged the impact we have in delivering support and preventative services for women, children, families in deprived communities.   WEB was the only service to have won that Award 2 years in a row.